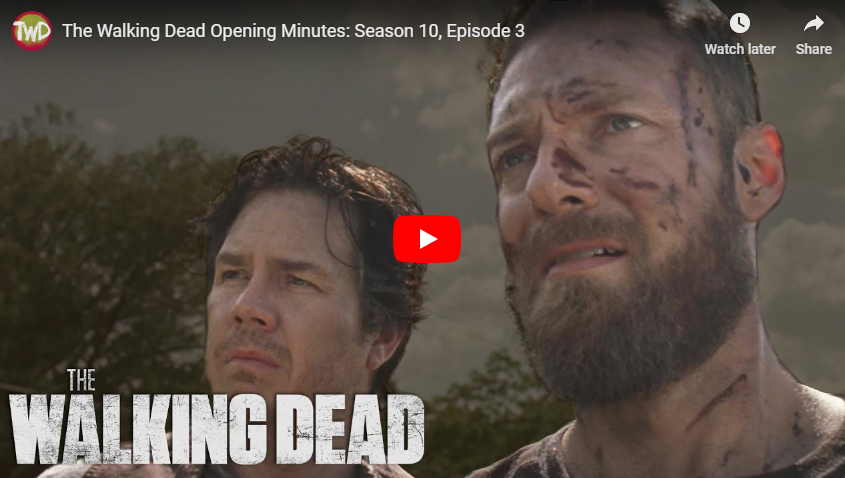 The camera pans to Michonne, Aaron, Eugene, and Gabriel. They are weathered and exhausted from defending the walls from the walkers for almost two days straight. The group is certain this is Alpha sending her hordes to deliver a message that borders can not and will not be crossed.

Gamma shows up and tells the group that Alpha wants a meeting. This is where the show starts to take off. Daryl, Carol, and Michonne head out to meet Alpha, while the rest of our group stays back to defend Alexandria. Meanwhile, Aaron and Negan (Peanut Butter and Jelly ) are teamed up by Gabriel and sent out on a mission.

There is a constant theme throughout this season, where our heroes’ past comes back to haunt them. Through the course of the episode, Carol battles PTSD. She uses pills to keep her awake as a coping mechanism, because when she sleeps the death of all her children, the most recent Henry, who Carol and Ezekiel adopted together after the death of Henry’s brother.

Carol is not the only one who is suffering from PTSD this season. Siddiq and Carol are linked as he had to lay witness to Alphas slaughter. Siddiq had to watch the whisperers cut all the heads off of our heroes and put them on spikes. So he could return to Alexandria and tell everyone the story.

Siddiq is suffering from survivors guilt. Dante (Juan Javier Cardenas) was a combat medic and tells a story to Siddiq of a handsome, charming soldier who everyone liked who pretty much fell apart entirely when he got back to the States. Dante reveals the story is about himself. This sets an illustration that even though our heroes are living a nightmare every day in this zombie apocalypse. Human emotions, feelings of love, loss, hate and morning are still prevalent and show us that human emotion has not changed at all.

Tragedy and Trauma are not the only ghosts in Sunday’s episode. There are other types of pain our heroes are going through such as hope. In the case of Eugene. Eugene somehow holds on to the hope that Rosita will one day fall in love with him. Despite her telling Eugene time and time again that it’s never going to happen. This episode shows Rosita snapping and telling Eugene that “it’s never going to happen ever. EVER. Never EVER”.

Eugene finally realizes that it will never happen between him and Rosita. He has built their entire relationship with the hope that they would eventually be more than friends. We see a moment of self-awareness here with Eugene and he befriends rosita. Eugene has finally shown that he is tired of the nice guy finishes last routine. I don’t understand the relationship Rosita and Gabriel have. It just popped up last season and was kind of there.

Gabriel had a love with Jadis that ended when she tried to have a walker eat him and took off with Rick in a helicopter. Now all of sudden he is kissing rosita and she is pregnant with his child. In my opinion, Gabriel and Rosita do not belong together. Rosita always said Eugene was a coward. He stepped up and saved our heroes from the saviors and he is stepping up again and raising Gabriel and Rosita’s child. Gabriel is a cowardly man of God.

Something tells me that Eugene’s chances of being with Rosita are not done. I think she sees Eugene as a real man now, someone who has stepped up time and time again for her. We as fans deserve to see a relationship between Eugene and Rosita. It would do a lot for the show. I digress…

Aaron and Negan team up, against Aaron’s wishes. It’s peanut butter jelly time. It makes no sense why these two were sent out on a mission together with other than to give Aaron closure and to face Negan man to man.

Aaron still struggles with the loss of his husband. Where it is much more distant than Carol and Siddiqs, he has never forgiven Negan for his loss. You can feel the tension build between the two. Every interaction between them you can feel Aaron’s hatred through his eyes and words when he speaks to Negan.

The two almost come to blows when a couple of walkers sneak upon them. Negan sees the walkers and allows Aaron to get tackled to the ground. The walker that talked Aaron has some sort of plant growing from his face, which temporarily blinds him. Negan sneaks off into the woods.

Aaron stumbles through the forest screaming for Negan as walkers follow. Aaron comes to a cabin in the woods and Negan is inside hiding in a dark corner. Aaron can’t see him because of what the plant did to his eyes. Aaron screams for Negan, Negan emerges from the shadows and stands over Aaron. Negan has this look of old on his face as if he wants to bash Aaron in the head with his crowbar. Then he extends his hand to help Aaron up.

Negan stands watch all night as Aaron rests. When Aaron wakes in the morning Negan is still there. This is a pivotal moment for Negan’s character. We see some humanity restored in Negan’s character. Making all his promises to Judith become truth. This also gives Aaron’s character a change of heart, as you can see his anger for Negan slip away.

Carol suffers from a much darker form of PTSD. Carol has lost every one of her children through the events of The Walking Dead. The most recent being Henry. Henry’s death ultimately ended her Marriage with Ezekiel. Carol decided to go out to sea and try to forget all that has happened.

Now that Carol is back. All those horrific memories are starting to creep up. She is not sleeping and is addicted to popping speed pills to keep herself awake. During the negotiations with Alpha, Carol couldn’t control her hatred and pulls a gun on her. Michonne barley stops her. This could have resulted in the entire group being killed.

On the way back to Alexandria Carol believes she sees Whisperers in the woods. She chases them down leading the group into an abandoned school. The group begins to think that maybe Carol is losing it. She starts to hallucinate and begins to think she is having conversations with Daryl that never happened. The Ghost of Henry appears behind her in one scene. She looks at a photograph and sees her serving dinner to all of her dead children, with all of their necks slit in the photo.

We now can’t tell what is real or hallucinations. Carol comes from a dream and wanders into a gym that is full of what looks to be walkers. Carol steps into a rope trap and is pulled upside down by her leg. She is fighting off the walkers and screaming for Daryl. She can kill the walkers and cut herself down from the rope.

Cut to the end scene and we see a whisperer turn into a walker. She has a stab wound in her stomach and resembles the walker Carol saw in the gym. This reveals to us Carol is not going crazy and she, in fact, did see the whispers in the woods.

This was overall one of the best episodes I have seen this year. It was very scary at points and had a great horror movie vibe. The episode was led by some great dialogue. The show did a great job shining light back on the main characters and foreshadowing in so many areas.

I believe the school that our heroes were driven to by the Whisperers, was the same school that Alpha met Beta. This episode will be a catalyst for the inevitable war between our heroes and the Whisperers. I truly believe Alpha had enough and drove our characters to this school for a very specific reason. What that reason is I am not sure. I will most definitely be tuning in next Sunday to see.

I think the season will pick up intensity tenfold in episode 4 Silence The Whisperers. 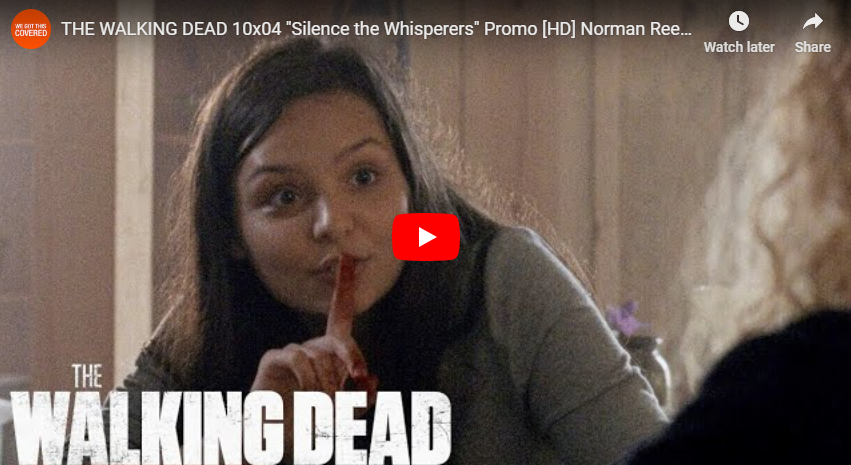 A look ahead to season 10 episode 4 Silence the Whisperers.

Still-paranoid Alexandrians get riled up over the Whisperers and take their fear out on Negan; at Hilltop, the group deals with an unexpected safety issue.

I love sports, This is my favorite time of year football is getting exciting and Hockey is right around the corner. I love art and comic books and I'm a huge movie buff. I love to Draw and produce music. I play guitar and build computers and play video games and I love to drink good beer!!!

Games We Have to Look Forward in November 2019

Dead Space-One of the Greatest of its Kind

Is it Time to Cut the Cord on Wendy Williams?

We are your home for Sports, Wrestling, and Entertainment. From Jock to Geek and everything in between we got you covered.